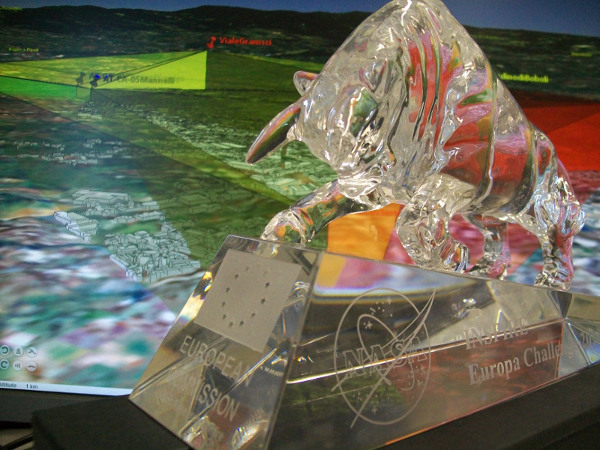 The gvSIG Association received one of the “Europa Challenge” awards, given by the NASA and the European Commission last Friday, during the “FOSS4G Europe” in Como, Italy.

The “Europa Challenge” award has an international character where besides the Spanish representatives from the gvSIG Association, projects from United States, Italy, United Kingdom, Hungary and India.

These awards are given to development projects of computer applications that use the NASA World Wind software, a virtual globe similar to Google Earth in open source, and are framed at the standards use to share and access to geographical information, defined by the INSPIRE European Directive.

The award was given by Patrick Hogan finally, the NASA World Wind project manager. Besides, the meeting served to stablish the bases of a collaboration agreement between NASA and the gvSIG Association.

The project presented by the gvSIG Association allows the integration of the virtual globe developed by the NASA in gvSIG, an open source geographical information system that has become a referent as technology for information analysis from the territorial point of view, in an international level, after it’s 10th anniversary. Trough gvSIG, thousands of users around the world manage their spatial information without any license use limitation.

Thank you very much to everybody who make gvSIG bigger day by day!

Here you have the presentation and videos: