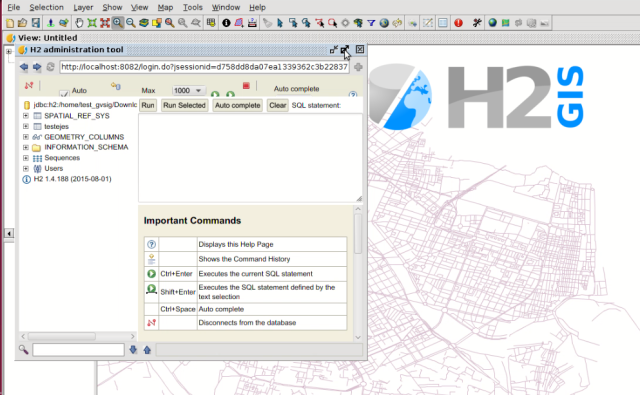 The next gvSIG Desktop version has a lot of novelties related to databases, but the most interesting that increases the existing tools is the H2GIS support, the H2 spatial engine.

H2 is a light Java database, very easy to use, that is included in gvSIG Desktop directly, so any installation is required.

Just as Spatialite it’s based on files, so distributing an H2 database is as much easy as sharing a concrete file.

One of the main advantages is to access to the own H2 administration tools from gvSIG Desktop, so we can perform any of the H2 operations allowed by H2GIS.

Something as much easy as creating an spatial index on an H2 table (or linked tables) multiplies its performance considerably.

Besides we can work from the H2 administration tool, not only with H2 tables but with any layer (for example a shapefile) that we have linked with the database.

Here you have a video where we export a shapefile to an H2 database, and we perform some easy spatial operations later (selection of elements by attribute and creation of a new layer), and finally linking a shapefile with the database. Besides we show you the H2GIS website where you can see examples of SQL queries for any type of spatial operations.

You have a new world of possibilities to discover in gvSIG Desktop!

4 Responses to Towards gvSIG 2.4: H2GIS, increasing the gvSIG Desktop potential