On the road to gvSIG 2.3: Dynamic segmentation (III)

In this third article about the new dynamic segmentation plugin, the tool to calibrate routes will be detailed.

This tool allows users to assign kilometer points information to a path that is to geocode road elements from their pk’s.

To proceed to calibration, two information layers are required: the route, obtained with the path creation tool, and a calibration points (pk’s) layer with the route identifier and an attribute that indicates the measurement value.

The tool is enabled when active View contains a linear layer of geometries with M coordinate and a point layer.

When activated, the following dialog where user can enter the required parameters for operation is shown 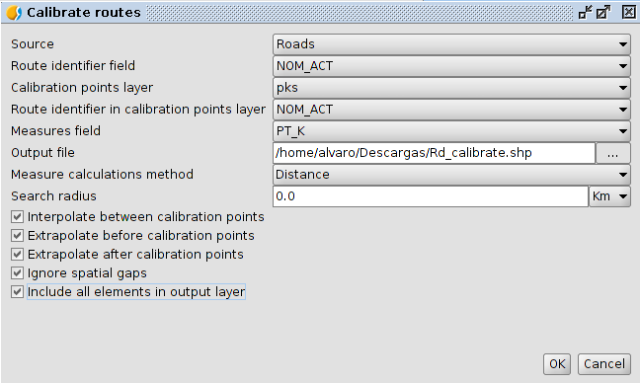 The calibration process can be performed over the entire layer or on the selected routes.
Related posts:

This entry was posted in english, gvSIG Desktop. Bookmark the permalink.

5 Responses to On the road to gvSIG 2.3: Dynamic segmentation (III)