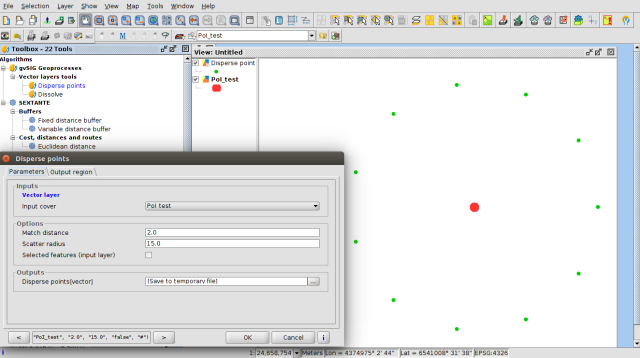 We present another novelty for the next gvSIG Desktop version, a geoprocess that allows to separate points that are located at the same coordinates (or close to them, depending on the tolerance level that we define) to a specified distance.

This geoprocess can be very useful when we want to identify elements visually that are in a same location at the data gathering. For example, data referred to the center of the street line.

As gvSIG help indicates: this geoprocess allows to scatter around a central point the points of a layer that are overlapped. From a point layer, a match distance and a scatter radius, this algorithm acts on the input layer looking for groups of points whose distance is less than or equal to the match distance. It scatters them, according to the scatter radius, around the centre of that group, creating a new point layer with the results.

At this video you can see how it works (the video has been recorded with the new set of icons):

This entry was posted in english, gvSIG Desktop, testing and tagged Geoprocessing, scattering. Bookmark the permalink.